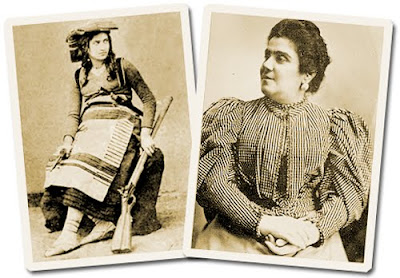 Many people get their impression of Southern Italian women through movies, television, or books written by other ethnic groups. I am fortunate to have grown up in an Italian/Irish neighborhood in Brooklyn and I’m well acquainted with the women who, for people like me, were the backbone of our communities.

I’m often confronted by outsiders about the brutally macho stereotype of Italian men in their stained “wife-beater” t-shirts and women in the kitchen with eyes cast down. I never tire of setting the record straight. Where I grew up, the men were indeed macho in the sense that many were former soldiers, and held jobs such as police officer, firefighter, long shoreman, sanitation or tunnel workers and other dangerous or difficult jobs, but at home it was the women who ran the show.

No household is identical, but it wasn’t always mama in the kitchen. In many of the families that I knew the men did much of the cooking when they were not at work, and shared the responsibilities of food preparation. It wasn’t a gender thing, and anyone who really knows Italians can tell you how important food is to us. I have heard it said that for Italians “It’s all about the food.” I never saw the kitchen as a prison for women, for us it was practically a place of worship.

Many of the men had seasonal or contract work, so either they worked long hours or not at all. When my father was working I barely saw him, my mother handled everything, from taking care of my siblings and I to painting our apartment or doing household repairs. I used to think she was superwoman. She even did the family accounting, a good thing too (sorry Dad). When there was no work for my father it bothered him, he saw it as failing his family. During those times it was my Mother who held the family together, eventually returning to work full-time like many of the other women in the neighborhood. The ladies tended to choose steady jobs that were unaffected by the ebb and flow of the shipyards or seasonal contracts. Without these women many families would not have been able to survive.

Our women watched everything; there was little that they didn’t know, and little that I got away with because my mother watched from every set of female eyes. It didn’t matter if they were mothers or not, or what they did for a living, the women of my neighborhood were watching, teaching, and protecting me.

I could have commemorated International Woman’s Day by listing the achievements of noteworthy individual women, such as Matilde Serao, Adriana Basile or Michelina De Cesare, but while they deserve to be remembered I chose instead to honor the women of my family and my community, because without them I would be nothing. From them I learned discipline, sacrifice and tenacity. From them I learned to function alone and within a group. From them I learned responsibility and respect. Every positive thing about me comes from or was reinforced by them. There are many women heroes in this world, but I never needed to look far for them, they were with me all along.

* Magna GRECE reserves the right to edit submissions for grammar and length needed. Personal information will not be used for marketing or any other purpose. Any wish to remain anonymous will be respected.

Iscriviti a questo blog per ricevere i post più recenti.